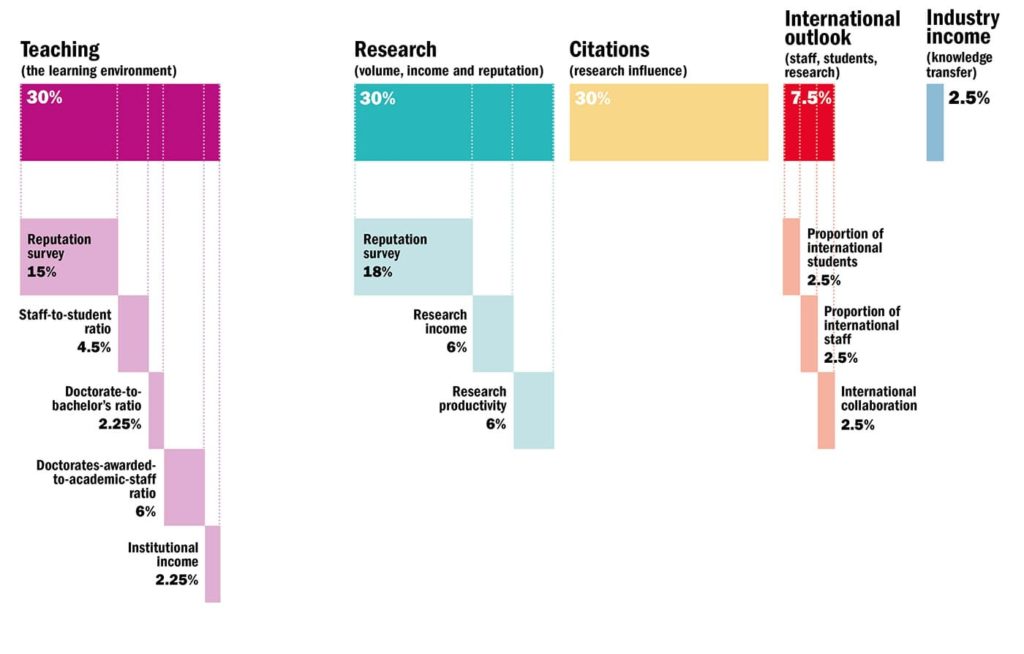 The three longest established and most influential global rankings are those produced by Quacquarelli Symonds (QS), Times Higher Education (THE) and ShanghaiRanking Consultancy (ARWU). All of these, along with other global rankings, primarily measure the research performance of universities rather than their teaching. They have been criticized for being “largely based on what can be measured rather than what is necessarily relevant and important to the university”, and the validity of the data available globally has been questioned.

However, despite the criticism, much attention is paid to global rankings, particularly ARWU, QS, and THE. Some countries, including Denmark and the Netherlands, use university rankings as part of points-based immigration programs, while others, such as Russia, automatically recognize degrees from higher-ranked universities. India’s University Grants Commission requires foreign partners of Indian universities to be ranked in the top 500 of the THE or ARWU ranking, while Brazil’s Science Without Borders program selected international partner institutions using the THE and QS rankings.

Here, we give you insights on the raking methodologies adopted in the three major global rankings ARWU, QS, and THE. 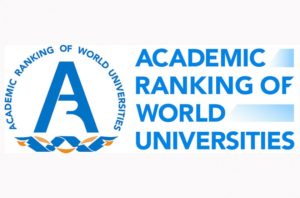 ARWU considers every university that has any Nobel Laureates, Fields Medalists, Highly Cited Researchers, or papers published in Nature or Science. In addition, universities with significant amount of papers indexed by Science Citation Index-Expanded (SCIE) and Social Science Citation Index (SSCI) are also included. In total, more than 1800 universities are actually ranked and the best 1000 are published.

Indicators and Weights for ARWU

The highest weighting of any metric is allotted to an institution’s academic reputation score, which is based on academic survey of over 100,000 individuals in the higher education space regarding teaching and research quality at the world’s universities.

The employer reputation metric is based on almost 50,000 responses to QS employer survey, and asks employers to identify those institutions from which they source the most competent, innovative, effective graduates. The QS employer survey is also the world’s largest of its kind.

Teaching quality is typically cited by students as the metric of highest importance to them when comparing institutions using a ranking. The measuring teacher/student ratios is the most effective proxy metric for teaching quality. It assesses the extent to which institutions are able to provide students with meaningful access to lecturers and tutors, and recognizes that a high number of faculty members per student will reduce the teaching burden on each individual academic.

The citations per faculty metric is calculated by taking the total number of citations received by all papers produced by an institution across a five-year period by the number of faculty members at that institution. All citations data is sourced using Elsevier’s Scopus database, the world’s largest repository of academic journal data.

A highly international university demonstrates an ability to attract faculty and students from across the world, which in turn suggests that it possesses a strong international brand. It implies a highly global outlook: essentially for institutions operating in an internationalized higher education sector. It also provides both students and staff alike with a multinational environment, facilitating exchange of best practices and beliefs. In doing so, it provides students with international sympathies and global awareness: soft skills increasingly valuable to employers. Both of these metrics are worth 5% of the overall total.

The teaching performance indicator is calculated as sum of the academic reputation survey (15%), which examines the perceived prestige of institutions in teaching, the staff-to-student ration (4.5%), the doctorate-to-bachelor’s ratio (2.25%), which is assesses how committed an institution is to nurturing the next generation of academics, the doctorates-awarded-to-academic-staff ratio (6%), and the institutional income (2.25%), which is scaled against academic staff numbers and normalized for purchasing-power parity (PPP). It indicates an institution’s general status and gives a broad sense of the infrastructure and facilities available to students and staff.

The most prominent indicator in this category looks at a university’s reputation for research excellence among its peers, based on the responses to annual academic reputation survey (18%). Research income (6%) is scaled against academic staff numbers and adjusted for PPP and fully normalized to take account of each university’s distinct subject profile. The final indicator in this area is research productivity, which counts the number of publications published in the academic journals indexed by Elsevier’s Scopus database per scholar, scaled for institutional size and normalized for subject.

The research influence indicator looks at universities’ role in spreading new knowledge and ideas and is calculated by capturing the average number of times a university’s published work is cited by scholars globally. Elsevier’s Scopus database and all indexed publications (journal articles, article reviews, conference proceedings, books and book chapters) are examined over five years.

The industry income indicator seeks to capture the knowledge-transfer activity of a university by looking at how much research income an institution earns from industry (adjusted for PPP), scaled against the number of academic staff it employs. The indicator suggests the extent to which businesses are willing to pay for research and a university’s ability to attract funding in the commercial marketplace – useful indicators of institutional quality.